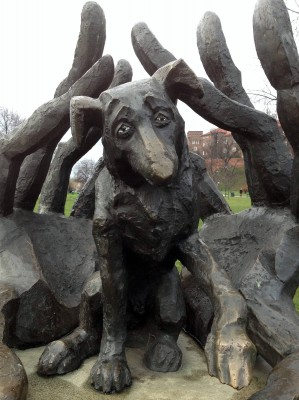 Now have local politicians in Kraków got the idea to
move the monument of Dzok in favor of yet another monument to World War II, but
the resistance is massive, most people thinks that it´s better to place war
monument closer castle Wawel and let Dzok continue to wait for his master .

The dog Dzok became famous in the early 1990s when his
master got a stroke in his car on the busy Grunwald Roundabout (B- 7) and was
taken away in an ambulance. The man later died but the dog was still there and
waited faithfully for a whole year to his return (1990-1991). Eventually, Dzok
accepted to live with an elderly woman, who daily has provided him with food.
When she died 1998 he was sent to a home for dogs, from where he escaped after
two days in captivity but he got killed the same night, run over by a train.

Many city dwellers who daily seen the dog wait at the
roundabout were emotionally involved by his fate. 2001 erected a statue of the
faithful dog Dzok, at Petite Fleur Czerwinski, next to the River wisla and
Wavelhill . It is created by the sculptor Bronisław Chromy (who also created
the Wawel Dragon). Since then, the monument has become a popular tourist
attraction. A collection box in the sculpture’s plinth provides assistance to
other abandoned pets. 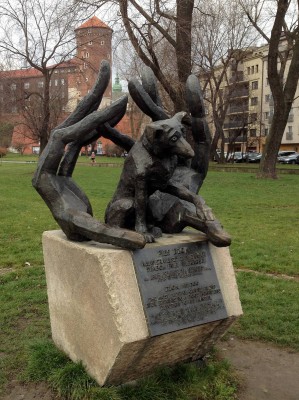