A common and loud little squirrel. It calls with a repeated, scolding trill that can easily be mistaken for a bird.

And old Hindu legend explains how the squirrel received the 3 stripes across its back. The Adi sethu bridge was being constructed at Rameswaram by Lord Rama and the Vanara Sena, and the squirrel played its part by rolling in beach sand, then running to the bridge to shake the sand from its back, all the time chanting Lord Rama´s name. Lord Rama was pleased by the creature´s dedication and, in stroking the squirrels back, the marks of Rama´s fingers were left on the squirrel ever since. The legend of Lord Rama and the squirrel started in Tamil Nadu and they are mentioned in one of the hymns of the Alvars. This is probably the reason that squirrels are considered sacred in India. 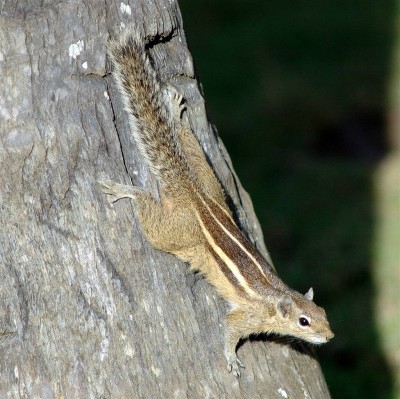